White Castle is a popular restaurant chain in America most known for its square hamburgers and sliders. There are 377 White Castle restaurants open in America, mainly remaining in the Midwest of the United States.

With the rise of the vegan diet becoming more impressive than ever, it’s important to know which restaurants offer enough vegan options to remain inclusive of their customer base. Today we’ll be looking at nine vegan options that you can choose from when you go to White Castle. 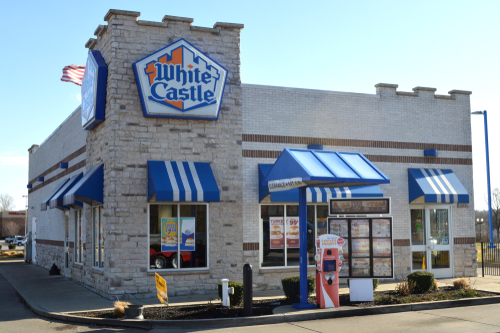 Unfortunately, White Castle does not offer an ingredients list on their website so we have looked to their allergen guide instead. Here we are able to see which options on the menu contain animal-derived ingredients and which don’t.

Many people who go to White Castle make the trip for their infamous sliders, so it makes sense that they offer a veggie slider for vegetarians and vegans. The Veggie Slider is made by Dr. Praeger’s Sensible Foods and contains peas, zucchini, carrots, broccoli, and spinach rather than any meat.

The Veggie Slider comes with a choice of Honey Mustard or Ranch, which both are not vegan-friendly. So, make sure you ask for neither of these sauces. If you want another sauce to top off your slider, ask for ketchup or mustard instead.

The Impossible Slider is a collaboration between White Castle and Impossible Foods. This is a plant-based slider that has the taste and texture of a meat slider, without any meat actually being included within the formula.

The Impossible Slider comes with cheese so make sure that you ask for this to be removed while you’re ordering.

The Black Bean Slider contains a patty made only of black beans, red peppers, and corn. This is the first completely vegan-friendly slider option on White Castle’s menu without any substitutions being made.

Unfortunately, the Black Bean Slider has currently been discontinued from White Castle’s menu. It’s unclear when or if they will be making a comeback.

French Fries are an ideal side for any slider, so we’re glad to report that White Castle’s French Fries are vegan. However, it’s worth noting that these French Fries would have been created in the same place with the same equipment as other products that may contain meat, seafood, and dairy.

Therefore, people with allergies might want to steer clear of the French Fries. If you follow a vegan diet, you might want to consider whether this is a dealbreaker for you or not.

Hash Brown Nibblers are bitesize hash browns that are served as part of White Castle’s breakfast menu. These are vegan-friendly, although they might have been fried in the same oil as other non-vegan foods.

Another product that is only available in some locations, the Fried Pickles are another vegan-friendly side that is incredibly popular with slider lovers.

Mott’s Apple Sauce is the only dessert option on the menu that is vegan-friendly at White Castle. These are pouches of apple sauce and they could be the ideal sweet treat after your slider and fries!

Overall, there is a respectable amount of vegan-friendly options at White Castle for you to enjoy. You can get a slider, side, drink, and even a dessert at White Castle, so you won’t be missing out when the rest of your party enjoys entire meals.

Unfortunately, a few of the vegan-friendly options are either not available at the moment or only available in select locations. Make sure to call ahead to your local White Castle to avoid getting disappointed if something you’re in the mood for is not available there.