Most commonly known simply as “Red Robin”, Red Robin Gourmet Burgers is one of America’s favorite casual dining restaurants. They are famous for their bottomless steak fries and namesake gourmet burgers, but what vegan meals are on offer? 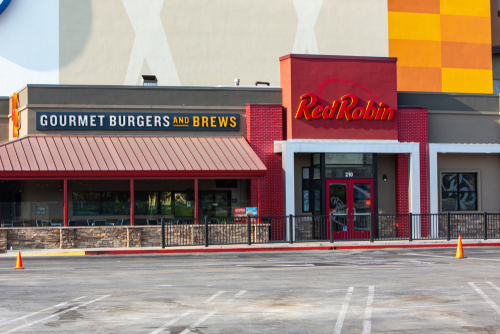 We decided to find out! Below, you’ll find 9 vegan options at Red Robin. Each of these is packed with flavor and, unlike the vegan options offered by many restaurants and fast-food chains, you’ve got proper meals to choose from rather than having to fashion a whole meal using a selection of side dishes!

Build Your Own Burger

There are currently two vegetarian burger options available to choose from on Red Robin’s menu. These are the Veggie Burger and the Impossible Gourmet Burger. But, while they aren’t specifically vegan, they can be altered by removing some of their components.

Removing these components from each burger doesn’t necessarily leave you with a taste bud-tantalizing meal, though. So, it’s often a better idea to build your own burger from scratch. You can do this using any of the following vegan-friendly ingredients:

Red Robin’s House Salad can be made into a delicious vegan meal simply by removing the cheese and croutons. Doing this leaves you with a mixture of tasty, crispy vegetables which you can dowse in a vegan Oil & Vinegar Dressing or Soybean Salad Oil.

This family-favorite appetizer is one of Red Robin’s most popular vegan meals. There’s no need to worry about fryer cross-contamination either, as the tortilla chips used to create this meal are cooked in a fryer that is only used for other vegan meals.

However, if you have a severe allergy to shellfish, wheat, eggs, milk, or soy, it might be a good idea to avoid all fried foods at Red Robin, just in case there has been a mistake with cross-contamination.

Despite their confusing name, Red Robin’s Steak Fries are also 100% vegan. This is because they are made solely from potatoes, and are cooked in the same fryer as other vegan meals.

Red Robin’s Sweet Potato Fries are also cooked using the same process as their Steak Fries and the tortillas in their Guac, Salsa, and Chips. This means that they are also completely vegan.

These are a great alternative to traditional fries and, even though they are cooked in a fryer, they are a slightly healthier option.

Following the theme of vegan-friendly chips, Red Robin’s Yukon Chips are also 100%. These are a great alternative to thicker fries and they are crispy, delicious, and extremely moreish. They are also a bit of a lighter choice of side dish if you’re planning on building an extremely large burger!

While eating out at a restaurant is a treat, it’s always a good idea to get as many vegetables into your diet whenever possible. This is where Red Robin’s Steamed Broccoli makes a good choice. Not only is it a totally vegan, paleolithic ingredient, but the fact that it is steamed means that there is no butter used to cook it.

Another healthy vegan option on offer at Red Robin is a simple portion of apple slices. This is also a pretty versatile order, as it can be put alongside a main meal or eaten as a vegan-alternative to a dessert.

It is worth noting that apple slices aren’t on offer at all Red Robin locations, so it’s worth checking ahead of your visit. Having said that, it’s highly likely that your server will arrange for a dish of apple slices to be made for you if you ask, even if it’s not on the menu.

As well as offering a good range of vegan meals, Red Robin also has a variety of vegan drinks to choose from. There are even some vegan alcoholic drinks on their menu, so you can really treat yourself to a fun night out without having to worry about consuming any animal products.

The selection of vegan drinks (both alcoholic and non-alcoholic) does vary depending on location, so again, it’s worth checking the menu before you plan your visit.

One of the best things about the vegan options available at Red Robin is that you’ve got whole meals to choose from. This means you don’t have to order several side dishes (and the associated expense) in order to create a satisfying meal.

We think your best bet would be to create your own burger, stacking it with as many toppings as you think you can handle! Pair it with steak fries, sweet potato fries, or Yukon fries and wash it all down with a delicious vegan beverage. And, if you’re particularly hungry, you could even start your night out by sharing a bowl of vegan guacamole with salsa and chips.

Does Red Robin have any vegan meals?

Yes! Red Robin offers 9 delicious vegan meals including burgers, fries, side dishes, and beverages. You can also enjoy a dish of sliced apples as a tasty vegan alternative to a dessert. Options do vary between locations, however, so it’s worth checking before you visit your local restaurant.

All fries on offer at Red Robin’s, including Steak Fries, Sweet Potato Fries, and Yukon Fries are vegan. The tortilla chips that make up Red Robin’s guac, salsa, and chips are also vegan. All of these are cooked in the same fryer as other vegan meals, so there’s no need to worry about cross-contamination either. Although, if you suffer from a shellfish,  wheat, eggs, milk, or soy allergy, it might be a good idea to avoid fried foods at Red Robin altogether.

Does Red Robin have any vegan burgers?

Red Robin doesn’t offer any vegan burgers, however, they do have two vegetarian options that can be customized to make them vegan. You are also able to build your own vegan burger and choose from a wide variety of vegan buns, patties, toppings, and condiments.