Studies show that there are nearly 14,000 McDonald’s restaurants in the United States, which means you can travel pretty much anywhere and come across one. They always seem to pop up whenever you are driving down the highway, but only when you are starving!

Everybody loves a trip to McDonald’s every now and again. But, have you ever gone with your friends and simply gone hungry because you are unsure what options are available for vegans?

Not anymore! We have all of the vegan options from McDonald’s in the USA right here for you. 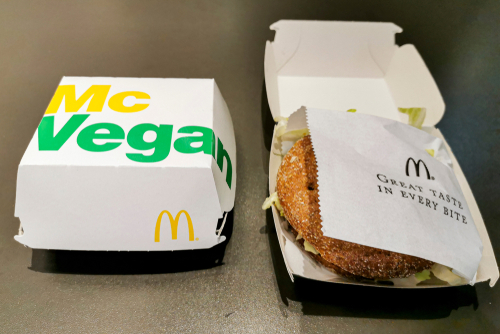 Leading a plant based lifestyle can be hard, as some shops and restaurants do not really cater for your dietary needs. However, veganism is becoming much more growingly popular, and so many companies have altered their practices and services to meet the needs of vegan and vegetarian customers.

McDonald’s is no different.

In recent years, McDonald’s have actually implemented new practices, and a lot of new, Vegan friendly meals for their growing population of vegan customers.

In European countries such as the United Kingdom and Germany, or in Scandinavian countries like Norway and Finland, McDonald’s actually offer Vegan Vegetable Nuggets, Spicy Veggie Wraps, or even Vegetable Deluxe Sandwiches.

In India, McDonald’s now offer a veggie McAloo tikki, whilst Sweden provides Falafel Nuggets and you can get vegan burgers in German McDonald’s restaurants.

That being said, despite big strides in vegan options across the world, American McDonald’s restaurants seem to be behind the times a little, with a much smaller list of options that are suitable for vegans.

Contents hide
1 What Vegan Options are in the United States McDonalds?
1.1 So, what are your options?
1.2 Side Salad
1.3 Southwest Chicken Salad (without the chicken or cheese)
1.4 Fruit & Maple Oatmeal
1.5 Apple Slices
1.6 Apple Pie
1.7 Sauces
1.8 Top Tips
2 What is Vegan at Mcdonalds USA?
3 Is there anything Vegan at Mcdonalds?
4 Does Mcdonalds have a Veggie burger in the USA?
5 Are Mcdonalds Fries Vegan?

What Vegan Options are in the United States McDonalds?

In the United States, the options for vegans are very few and far between. There are no vegan wraps, breakfast sandwiches, burgers, nuggets or any specially catered dishes.

Worsening the situation is that the french fries in the United States McDonald’s have ‘natural beef flavor’ with milk and wheat derivatives, which makes even the fries unsuitable for a vegan diet.

So, what are your options?

Despite the obvious lack of options for a vegan lifestyle, you do not have to go hungry whenever you and your friends or family visit McDonald’s. There are actually a few items on the menu that will be suitable for a vegan diet.

The first option is of course, the Side Salad. Although this may not seem too exciting, there are no animal food products or derivatives, and the dish is 100% completely vegan for your peace of mind.

Just make sure that you are ordering the side salad and not any other salad on the McDonald’s menu, as these will contain dairy based dressings or even chicken and cheese.

Southwest Chicken Salad (without the chicken or cheese)

You can however order a Southwest Chicken Salad from McDonald’s, but make sure that they remove both the cheese and the chicken, and instead cover it in a vegan friendly dressing for extra added flavor.

The Southwest Chicken Salad (without the chicken or cheese) would then just contain poblano peppers, corn, lettuce, some black beans and a cilantro lime glaze for more of an interesting meal than just the lettuce and tomatoes you would find on the side salad.

In the United States, McDonald’s are in partnership with Newman’s Own salad dressings, which you can add to your salads. If you want to do so, then keep in mind that the only vegan dressings on the menu are the low fat balsamic vinaigrette and the creamy french dressing!

Another option you could have is the McDonald’s fruit and maple oatmeal. This is a great option from the McDonald’s breakfast menu, as it is filling, heart, and full of fruit. Just make sure that you ask for it to be served without cream as this comes standard on the dish.

Without the cream, the Fruit and Maple Oatmeal is a delicious vegan breakfast meal from McDonald’s.

In addition, you can order the apple slices from McDonald’s if you are still feeling hungry, as these can be ordered as a side. This would make a great little dessert after your side salad for a more filling meal.

However, you may be interested to know that the apple pie is actually totally vegan friendly. Hurray! This means that you can enjoy a hot slice of McDonald’s apple pie without having to worry about how it was made, and these things are absolutely delicious.

You will also want to keep in mind that the only dipping sauces that are suitable for vegans are the Sweet N Sour Sauce and the Barbecue Sauce from McDonald’s. We are not quite sure what you have to dip into them that is vegan, but hey, at least the option is there!

Despite the lack of options for vegan food at McDonald’s, a lot of their beverages are suitable for vegans, such as their coffee, juices, sodas and slushies.

However, you will need to keep away from the drinks made with milk such as milkshakes, smoothies or ice cream mcflurries as they will all contain dairy, and are unfortunately not vegan.

What is Vegan at Mcdonalds USA?

If you are a vegan and you find yourself eating at Mcdonalds, finding something to eat can be very difficult as there are currently no vegan options available at Mcdonalds USA.

This doesn’t mean that there are no foods suitable for vegans, but it does mean that ordering your meal will be hard as you will have to modify an existing meal and make it vegan-friendly. Not even their fries are suitable for vegetarians or vegans.

Is there anything Vegan at Mcdonalds?

There is nothing at Mcdonalds which is explicitly vegan-friendly, however, it is possible to modify their existing sandwiches, wraps, and breakfast items to make them safe for consumption.

Mcdonalds fries contain ‘natural beef flavor’ in the USA meaning that they are not vegan or vegetarian friendly, but you can alter some of their other foods to suit your needs.

You can order a salad without any meat, cheese, or dressing to make it vegan, you can also order fruit and maple oatmeal as long as you ask for it to be made with water instead of cream and milk. But aside from these two meals, your options are very limited.

Does Mcdonalds have a Veggie burger in the USA?

While Mcdonalds in other countries across the world currently offer veggie burgers, Mcdonalds in the USA does not. However, this is set to change in 2021 as Mcdonalds recently announced that they are adding a new burger to their USA menu, a burger called the McPlant.

Despite it not being available, this burger has already become a favorite among both vegetarians and vegans as it finally offers them an option that can make a proper meal, unlike the current vegan options at the store.

This burger will be plant-based and is guaranteed to be popular once it becomes available for purchase.

No, Mcdonalds fries are not vegan. At least they aren’t in the USA. Some countries across the world have altered the way in which they cook their fries in order to make them suitable for vegetarians and vegans, but the USA is not one of these countries.

In the USA, Mcdonalds fries still contain ‘natural beef flavor’ which is supposed to make them taste nicer, however, this also makes them unsuitable for both vegans and vegetarians.

So if you are a vegan eating at Mcdonalds, you should avoid the fries, even though they seem like a safe option.