There aren’t many people that can say that they don’t enjoy a trip to Jack In The Box! This American fast food restaurant was founded in 1951 and since then it’s grown to over 2,220 locations in 21 states, with each one at the forefront of providing delicious meals to hundreds of people every day.

But has Jack in the Box kept up with the ever-increasing number of people that have adopted the vegan lifestyle? 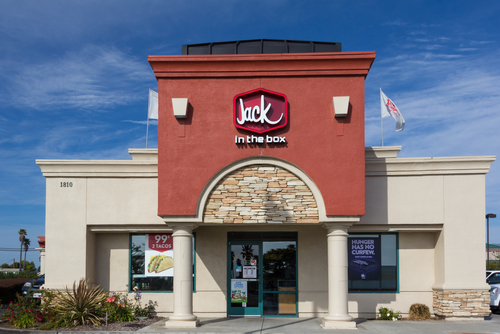 We’re here to find out! Below, we’ll take a look at all of Jack in the Box’s vegan options, making it easier for you to make your choice the next time you visit this much-loved restaurant.

Contents hide
1 Side Salad
2 Fries, Hash Browns, and Potato Wedges
3 Jack’s Teriyaki Bowl
4 Sauces
5 Drinks
6 Conclusion
7 Does Jack In The Box Have A Vegan Burger?
8 Are Jack In The Box Egg Rolls Vegan?
9 What Can A vegetarian Eat At Jack In The Box?

OK, it’s hardly an exciting one to kick things off, but there’s also nothing wrong with a trusty side salad! The ingredients list of the Jack in the Box side salad are:

This side salad is ordinarily served with Ranch dressing and croutons, but both of these contain milk so they aren’t vegan-friendly. However, the dressing can be substituted for a low-fat balsamic vinaigrette which is 100% vegan and, arguably, even more delicious than the Ranch dressing that usually accompanies the salad.

You can’t visit a Jack in the Box without getting a portion of fries, hash browns, or potato wedges. And, luckily for all the vegans out there, none of these contain any animal products. Each of them is also certified as vegan-friendly by Peta!

Of course, with fries, hash browns, and potato wedges you need a dipping sauce! Jack in the Box has thought about this too and offers four vegan sauces; Barbecue Sauce, Frank’s Red Hot Buffalo, Sweet N’ Sour, and Teriyaki.

Just like a lot of restaurants these days, Jack in the Box has adapted some of their dishes so they can be made vegan on request. Jack’s Teriyaki Bowl is one such dish. The standard recipe calls for chicken which, obviously, is not vegan. However, this can be removed and replaced with an extra portion of delicious, fresh vegetables.

The accompanying rice and Teriyaki sauce are also vegan, so it’s quite an easy swap and you’ll be getting a dish that’s packed with flavor.

While many restaurants strive to include as many vegan options on their menu as possible, one thing that is often overlooked is sauces. And, when you’re at a fast-food restaurant, getting a delicious dipping sauce is one of the most exciting things about your visit!

Again, Jack in the Box has considered this and offers a huge range of vegan-friendly sauces. Here’s a full list of all their vegan sauces:

Unfortunately, Jack in the Box doesn’t offer any vegan milkshake options or specialty drinks. However, there are still lots of vegan drink options available. These include:

The Raspberry, Mango, and Peach teas are also vegan, and are an especially delicious treat on a hot day!

By ordering a combination of the above meals there’s no reason why you can’t get a delicious and very satisfying vegan lunch or dinner from Jack in the Box. And, hopefully, you’re now well-equipped to know what you can order without having to spend a long time scouring the menu for ingredients and information!

Does Jack In The Box Have A Vegan Burger?

Unfortunately, Jack In The Box does not currently have a vegan burger on its menu. While they introduced a plant based chicken burger last year it was a temporary addition which is sadly no longer part of the menu.

A solution to satisfying any burger cravings that you may have is to ask for a burger that consists of vegetables found in the other burgers such as lettuce, tomatoes, etc, however, it will not contain a vegan patty.

They also offer a range of vegan sauces including Ketchup, Mustard, and fire roasted salsa which you may add to your vegan burger.

Are Jack In The Box Egg Rolls Vegan?

The egg rolls offered at Jack In The Box are neither suitable for a vegan or vegetarian diet and this is because of the ingredients that they are made from. Though they contain cabbage, celery, carrots, and onions, as suggested by the name they also consist of eggs hence why they aren’t suitable for vegans.

Besides this, they also contain pork and anchovies. Although many other restaurants offer spring rolls that solely consist of vegetables, Jack In The Box is yet to follow suit and add a vegan alternative to their menu that doesn’t contain any meat, fish, or eggs.

What Can A vegetarian Eat At Jack In The Box?

Impressively, Jack In The Box offers a range of food items that are suitable for vegetarians. Although they do not have a vegetarian burger, you may wish to opt for a burger filled with vegetables and an accompanying vegetarian sauce.

If this wasn’t impressive enough vegetarians can also order the apple slices, spicy corn sticks, mini pancakes, and cranberry muffins. To compliment your meal there is a selection of vegetarian sauces and condiments available including the barbeque dipping sauce, Sweet N Sour dipping sauce, Fire Roasted Salsa, Ketchup, and many more.