Some obvious things cannot be consumed when you’re following a vegan diet. Meat, dairy, eggs, and even honey are all off the menu. But one of the most surprising, and certainly the most hotly debated ingredient is sugar.

While being vegan is first and foremost about reducing animal suffering, as well as reducing your environmental impact, and generally improving your health, everybody needs a sweet treat from time to time. 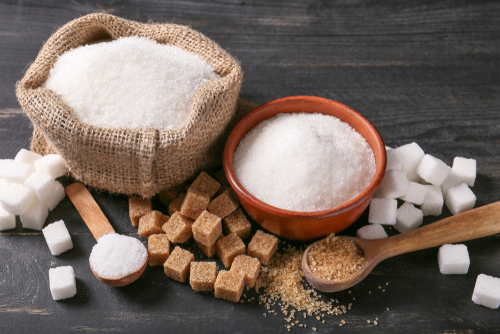 But, when it comes to how the sugar you’re consuming is processed, a little research is needed. This is because a lot of sugar is refined using bone char which, as you may have guessed, is an animal product. This gives it the purest white color possible.

So, how can you make sure that the sugar in your vegan candy or dessert is actually vegan? Don’t worry, we’re here to help! Below you will find our definitive sugar guide for vegans. We’ll take a look at the processing methods for two of the most commonly used types of sugar in food production and, in the end, you’ll have a much better idea of if your sugar is vegan or not.

The answer to this question really depends on how the sugar has been processed. Technically, sugar is vegan since it is plant-based. However, it can lose its vegan credentials if it has been processed using bone char. And, while there are never any bone fragments left in the sugar at the end of the refining process, it will still have come into contact with animal byproducts.

It also depends on the source of sugar you’re consuming. In this instance, we’ll be looking at sugarcane and sugar beets, as these are the most common and widely available as both table sugar and as an ingredient in processed foods.

Let’s take a look at how both sugarcane and sugar beets are processed. This will give you a better understanding of their vegan-friendliness, as well as some useful insight into the sugar production process.

As the name suggests, beet sugar is produced by beets. This means that they start out as a root vegetable and, as such, beet sugar begins its life as a completely vegan product. But does it lose any of its vegan credentials during the refining process? Let’s find out.

Here’s how beet sugar is produced:

As you can see from the processing method we’ve outlined above, beet sugar production requires no animal products or labor. This means that it is 100% vegan. So, if you’re looking for vegan sugar, beet sugar is the way to go!

While beet sugar is completely vegan, the same thing can’t be said about cane sugar. We’ve touched on this briefly above, but we’ll go into more detail below on the refining process used for producing cane sugar and explain exactly why it isn’t vegan.

It is important to note again that even though the sugar comes into contact with animal bones, there are never any bone fragments left behind in the sugar once it has been processed. It merely removes impurities from the sugar and gives it a white color, rather than becoming a part of the sugar itself. This also means that it is certified as Kosher.

This where the debate really lies. If you’re a super-strict, Level 5 Vegan, then you’re absolutely not going to want to go anywhere near cane sugar. However, if you’re less concerned about it being processed using animal bones and are content knowing that you’re not actually consuming any animal products, then it may be a suitable option for your own ethics.

Brown sugar is made by adding molasses (the non-extracted sugars that occur during the production of sugar cane), to white sugar. Since molasses is a byproduct of the sugarcane production process and is extracted before the bone-char refining stage, it is vegan.

However, this is where things can become a little confusing with brown sugar. We know that molasses is vegan, but if the white sugar it has been mixed with is cane sugar that has been filtered through bone char, then it isn’t vegan. Conversely, if the molasses is mixed with beet sugar, then it is.

So, to put it simply, if you’re looking for vegan-friendly brown sugar, then you need to look for a brand that mixes molasses with beet sugar.

Powder sugar is created by mixing finely ground white sugar with cornstarch. Much like brown sugar production, the vegan credentials of powdered sugar really depend on the type of sugar that has been mixed with the cornstarch.

If the sugar is cane sugar, it will likely have come into contact with bone char and, therefore, it wouldn’t be vegan. However, if the original sugar was beet sugar, then the powdered sugar would be vegan.

These are less commonly found in food production, and they are certainly much harder to find at your local grocery store. However, they are worth the trip to a specialist shop as both coconut sugar and date sugar are completely vegan.

Each of them is processed in the same way as beet sugar, and at no point do they come into contact with any animal byproducts.

We understand that life is short and you may not always have the time to search through numerous brands of sugar to find out whether or not it is vegan-friendly! So, make things easier, we’ve provided a list of the best vegan sugar brand and vegan sweeteners below:

As you can see, sugar is a little more complicated than you might have thought! It’s also seriously debated within the plant-based community, but, hopefully, you’ll now know more about sugar production than you did before. This doesn’t only equip you with the knowledge to make your own decision over whether you believe certain sugars should be considered or not, but also gives you the power to inform others that may be questioning it.

However, to simplify things, the main takeaway here is that all sugars aside from cane sugar are considered vegan. This includes beet sugar, coconut sugar, and date sugar. It also includes brown sugar and powdered sugar, although a little extra research is needed to really double-check whether these two are vegan.

It’s also worth noting that if the packaging includes the words ‘organic’, ‘unrefined,’ ‘natural,’ or ‘raw,’ then there is a solid chance that the sugar you’re looking at is 100% vegan.