Nutella is a delicious treat with a multitude of purposes. You can spread it on toast for an indulgent morning snack, incorporate it into a luxurious frosting, or even melt it into some warm milk for the best hot chocolate you’ve ever had!

Whatever it is you want to use if for, anybody following a plant-based diet wants to know one thing about this nutty, chocolatey spread - is Nutella vegan? 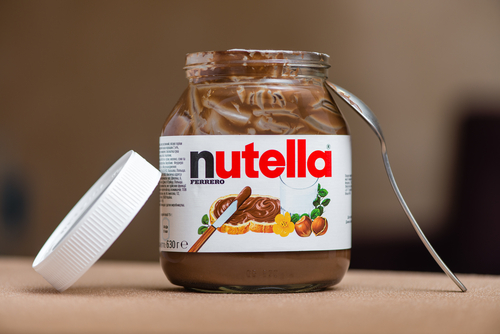 In a word - no. Unfortunately, Nutella is not vegan. Below, we’ll take an in-depth look at Nutella and explain what makes it vegan-unfriendly. We’ll also talk about some other issues that don’t only make Nutella an unsuitable choice for vegans, but also some other problematic ingredients that it contains.

The main reason why Nutella isn’t vegan-friendly is that it contains milk. Check through the list of ingredients on a jar of Nutella and you’ll see ‘Milk Powder’ listed amongst them which, although isn’t liquid milk, is still derived from milk and, therefore, cows.

While this means that Nutella is suitable for anybody following a vegetarian diet, it’s one of five reasons why Nutella isn’t vegan.

One of the things that Nutella’s parent company “Ferrero” (yes, of Rocher fame) likes to boast about is that Nutella is made using only seven ingredients. But the actual formulation of Nutella varies from country to country, so you’re never actually getting the same product in each place.

There are, however, seven main ingredients that make up the basic formula for a jar of Nutella. These are:

Again, milk is the standout, obvious reason why as to why Nutella isn’t vegan-friendly. However, there are other ingredients on this list that make Nutella a potentially problematic choice for anybody on a vegan diet.

Many people assume that sugar is vegan. This is a fair assumption since it comes from a plant, however, non-vegan issues begin to creep in when you take an in-depth look at how sugar canes are processed once they’ve been cut down.

Bone char, which comes from animal bones, is occasionally used to remove any impurities in the sugar. It’s also used to give it a whiter, brighter appearance. To be fair, as time has moved on and more and more food companies have made an effort to produce universally appealing products, this process has declined.

But finding out if a product contains bone char is also incredibly difficult. And, in the case of Nutella and the well-guarded gates of Ferrero, it becomes even more difficult to find out. With this in mind, anybody striving to follow a 100% strict vegan diet should contact the manufacturer of a sugar-containing product to find out whether or not it contains bone char.

Even if the sugar in your product is vegan, it’s still not a healthy choice. Veganism isn’t only about avoiding animal-derived products, it’s also about healthy eating. Therefore high-sugar items, such as Nutella, should be avoided or enjoyed in moderation.

We all know that palm oil is bad news. Yes, it’s certified vegan since it comes from a plant. But the ethical issues surrounding palm oil are certainly ones that should put any vegan off eating Nutella.

If you’re unaware of the ethical issues associated with palm oil, the main problem with it is deforestation. Miles of natural rainforests have been cleared to make way for palm oil plantations. And, with this comes the loss of habitat for several species, most famously the Bornean Orangutan.

Another issue with palm oil is that, just like sugar, it’s incredibly high in calories. It’s also super low in nutrients, so there really isn’t any benefit to eating it. When you keep in mind that the two leading ingredients of Nutella are sugar and palm oil, you’re potentially opening yourself up to a wealth of health issues by eating it.

Trying to avoid palm oil is incredibly difficult as it’s in so many products, even those that we don’t eat. But Nutella is certainly one palm-oil containing product that is easy to leave out of your shopping cart, especially if you’re a vegan.

This is an ingredient that you might see on a lot of products and it kind of hides behind its own clever name. Put simply, the world Lecithin comes from the Ancient Greek word for ‘egg yolk’ and, as such, it isn’t vegan.

However, while lecithin is traditionally formed from egg yolks and other animal products, it can also be made from soy. And, in the case of Nutella, it’s made from sunflower seeds. This doesn’t make Nutella vegan-friendly though, as it still contains milk.

There’s often a lot of confusion between cocoa and chocolate, but they are not the same thing. Cocoa is 100% vegan as it comes from a plant. However, when it is used to make chocolate, it loses its vegan credentials.

This is because milk, honey, butter, cream, and lecithin are added to create chocolate, along with other additives and non-vegan ingredients.

So, although Nutella states that it contains cocoa, the milk powder in its ingredients make it non-vegan and basically turn the cocoa into chocolate.

While Nutella is not suitable for anybody with a vegan lifestyle, it doesn’t mean that there aren’t some great alternatives out there to choose from instead. It’s also super easy to make your own alternative to Nutella at home.

Here’s how to make the perfect, plant-based Nutella alternative:

To make things as clear as possible, we’ll state again that Nutella is not vegan. However, there are some fantastic plant-based alternatives available, and you can even try making your own homemade Nutella.

By doing this you’ll have full control over what goes into it and you’ll be able to rest assured that you’re not consuming any animal products or any ingredients that are surrounded by ethical issues.