Laffy Taffy is a strip of fruit-flavored taffy that is incredibly popular among children and adults alike. The candy was first introduced in the 1970s with the name Beich’s Caramels, although this did not accurately represent the candy at all. 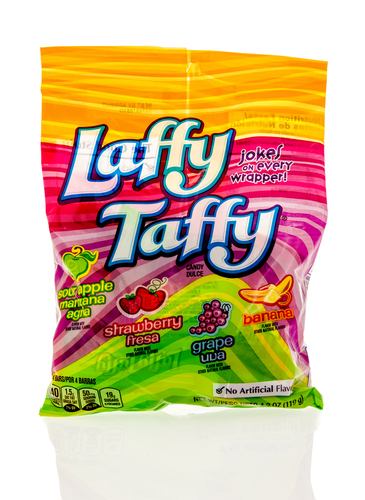 Nestle now owns Laffy Taffy and mass produces it all over the world, with it being the most popular in the USA. There are many flavors to choose from, including green apple, banana, grape, strawberry, blueberry, and even chocolate mousse flavor.

The fruity flavors might suggest that they are vegan, but is this really the case? We’ll be looking into whether Laffy Taffy is vegan, considering all of the flavors and products that Laffy Taffy comes in.

Laffy Taffy Minis are short pieces of fruit-flavored taffy that are sold as part of a packet. They are sold in the majority of stores and are one of the most popular Laffy Taffy products.

As you can see, there are no animal products in Laffy Taffy Minis. This means that they can be considered vegan. However, many people have their own opinions on palm oil. We’ll talk more about this later on in our article, but it’s something to consider with your personal opinions.

Laffy Taffy ropes are long pieces of taffy that are sold in most sweet shops. They are cheaper than Laffy Taffy Minis but you get fewer servings out of the Ropes. There is a Mystery Swirl flavor of Laffy Taffy Ropes which is particularly popular.

Again, Laffy taffy Ropes are vegan as there are no animal-derived products within the ingredients list. These candies have the exact ingredients list as Laffy Taffy Minis and therefore have a few controversial ingredients which we will look at later.

Laffy Taffy Stretchy and Tangy is a candy that has been made due to a collaboration between Laffy Taffy and Wonka. The candy is exactly what it says on the packet - stretchy pieces of taffy with a tart taste.

This ingredient list is different from those that we have looked at above, so we cannot automatically say that Laffy Taffy Stretchy and Tangy are vegan. The addition of Egg Albumen, which is another name for egg whites, makes this candy not vegan-friendly.

We all love jelly beans, so Laffy Taffy has capitalized on this and decided to create their own form of jelly beans. They are small chewy candies flavored with bananas, cherries, grapes, and apples.

Unfortunately, Laffy Taffy Jelly Beans are another candy that is not vegan due to the beeswax in the ingredients list. Beeswax is not considered vegan because vegans consider the bees to have been exploited by harvesting the honey.

Sugar is added to almost every candy and is controversial within the vegan community. This is due to the fact that refined cane sugar is processed using bone char to naturally bleach it white.

By the time the sugar is used in candy all of the bone char has been removed. However, some vegans still choose not to consume refined cane sugar due to the method used. Laffy Taffy does not tell us which type of sugar they use.

So, it’s up to you whether you consider the sugar used in Laffy Taffy products to be considered vegan or not. In our article, we have considered it vegan, but the decision comes down to you.

Palm oil is a controversial ingredient because it is technically vegan as it comes from palm trees. However, the sourcing of palm oil and palm fats has created an influx of deforestation and detrimental environmental effects.

These effects have harmed animals by taking away their habitats and leaving them hungry, without shelter, and to fend for themselves. Vegans and non-vegans alike should consider cutting palm oil out of their lifestyle altogether.

While the two former Laffy Taffy products are considered vegan, they still contain controversial ingredients that you should consider before introducing them to your vegan diet. These include sugar and palm oil.