There isn’t a kitchen in the country that doesn’t have a bottle of ketchup in one of its cupboards.

This much-loved condiment is the perfect accompaniment to many dishes from many different cuisines, but one question remains - is ketchup vegan? 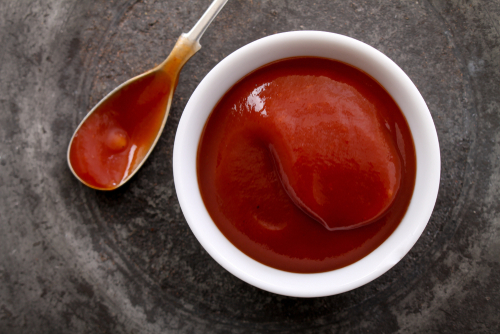 Below, we’ll take an in-depth look at ketchup and find out whether or not it’s a suitable choice for anybody following a plant-based diet.

With this in mind, there really isn’t a definitive answer to whether or not tomato ketchup is vegan. So, instead, we’ll look into the ingredients of the world’s most famous ketchup brand; Heinz Tomato Ketchup.

At the time of writing, Heinz currently has around a 60-80% market share, so it’s definitely the best brand to look at when trying to find out if ketchup is vegan.

The good news is that Heinz Tomato Ketchup is 100% vegan! There are also only a handful of ingredients that go into making it, which is always a bonus for anybody trying to keep a closer eye on what goes into their body.

Here is every ingredient that goes into a bottle of Heinz Tomato Ketchup:

As well as being completely vegan, Heinz Tomato Ketchup is made without any artificial preservatives, colors, or flavors. It’s also free from thickeners, palm oil, and doesn’t contain any gluten-containing ingredients.

But how has the sugar used in making ketchup been processed? One of the ways that sugar is processed is by using a product that is derived from animal bones, also known as ‘bone char’. This is something that you should keep a close eye out for on any product that claims to be vegan, as it certainly takes away from its vegan credentials.

Luckily, this isn’t the case for Heinz Tomato Ketchup. In fact, Heinz released the following statement:

“We can confirm that Heinz Tomato Ketchup is suitable for a vegan diet. Our sugar is not refined using bone char from animal bones.”

So, to reiterate, Heinz Tomato Ketchup is vegan-friendly! And, although it’s not certified by the Vegan Society, there are no animal products in the list of ingredients nor are there any animal byproducts used in the processing of its sugar content.

Should Vegans Be Concerned About Bone Char?

We know that there is no bone char used to process the sugar used in Heinz Tomato Ketchup, but we can’t be certain that this is true for any other kinds of ketchup labeled as vegan or non-vegan available to choose from.

However, your own principles are depended on quite heavily when it comes to following a vegan diet. By removing meat from your diet, you’re removing your own demand for animal products from the market, as well as avoiding the need for animal suffering and death. And, by removing eggs, dairy, and other mainstream animal products from your diet, you’ll be living about a 98% vegan lifestyle.

Living a 100% vegan lifestyle is much harder to achieve since there are so many animal byproducts used to process certain ingredients. So, to reach level-five vegan status, you really have to put in a great deal of effort.

So, really, whether or not you need to be concerned about bone char really depends on how strictly vegan you want to be. You might decide it’s easier to concentrate solely on removing meat, eggs, and dairy products from your diet rather than researching bone char and put the time and effort it would take doing this into educating other people about the benefits of living a vegan lifestyle instead.

Are All Heinz Ketchups Vegan?

As well as their traditional tomato ketchup, Heinz also offers a range of different kinds of ketchup. This includes reduced salt, reduced sugar, and the following three flavors:

But, are any of these condiments vegan? In a word, yes! While none of the above kinds of ketchup are certified as vegan, they don’t contain any animal products and are claimed as vegan by Heinz themselves. None of them contain bone char either, so they are a good choice for anybody trying to follow a super-strict vegan diet.

While Heinz is undoubtedly the dominant condiment brand, and it has a range of vegan ketchups, they certainly aren’t the only vegan-friendly choice on the market. There are actually quite a few vegan ketchups available and some are even healthier and often more ethically produced, too.

The majority of mainstream Heinz alternatives fall into the same category as Heinz’s own ketchups. This means they are vegan, but there may be some concern over the way their sugar content is produced. And, while Heinz has clarified that their ketchups are bone-char free and 100% vegan, the same thing can’t be said for all brands. So, again, this is something to keep an eye out for if you’re striving for total veganism.

To make things a little easier, we’ve put together a list of ketchup brands that are certified by the Vegan Society:

How To Make Your Own Ketchup

Of course, one way to make sure that your ketchup is 100% vegan is to make your own from scratch. Not only do you have more control over what goes into it, but it’s also a great way to save some money, so it’s a total win-win situation!

It’s also super easy and, while it’s unlikely that you’ll end up with a ketchup that tastes exactly like Heinz, you can at least be certain that it is vegan and free from bone char.

Here’s how to make your own ketchup

It’s really that easy! Once you’re done you’ll have 250g of delicious, homemade ketchup that is free from all animal products and 100% vegan!

When it comes to answering the question of whether or not ketchup is vegan, it really depends on how the sugar used to create it has been processed. As a rule, there are no animal ingredients used to make ketchup, however, the sugar in some brands could have been refined using bone char.

When it comes to market-leader Heinz though, it’s good news for vegans! None of the ketchups in the entire range produced by Heinz contain any animal products and, while they aren’t certified by the Vegan Society, there is no bone-char used to process the sugar used in it’s creation.

And, of course, if you’d like to be 100% certain that your ketchup is vegan, you can always try making some of your own using the recipe above.