Also known as glycerine, glycerin, or by its E number of E422, glycerol is an odorless, colorless liquid that is often added to mass-produced food products. Its most common use is as a sweetener and you’ll find it in a range of products from chewing gum to condensed milk.

It also has a place outside of food products and is used as an additive in various other industries including pharmaceuticals and cosmetics. It’s even a component in E-cigarette liquids and antifreeze! 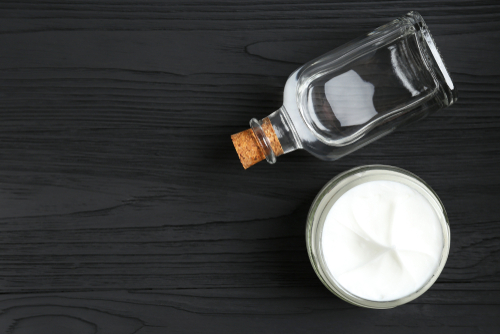 But is glycerol vegan? If you’re following a plant-based lifestyle, this is an important thing to know as you won’t want to consume it, but you’ll also want to keep it out of your household products. Below, we’ll take a deeper look at glycerin, explore its vegan credentials, and find out what it’s made from.

Is Glycerol Animal or Plant-Based?

Unfortunately, there is no real definitive answer to this question, which makes it even harder for vegans to determine whether or not glycerol is vegan. It can be produced from tallow, which is rendered animal fat, and it can also be produced from plant-based sources, most commonly soy.

So, unless a certain product is labeled as being vegan, the task of finding out whether the glycerol that has been used to make it is vegan will take you to the brand’s customer support team. However, this is time consuming and doesn’t guarantee you an actual answer.

The alternative to this is to purchase an alternative product that you already know is 100% vegan. While you may feel as though this is limiting your choices, you’ll at least be able to rest assured that you’ve picked a product that you know for sure doesn’t contain any animal-based ingredients.

Concentrate, here comes the science part! Don’t worry, we won’t go into too much confusing detail here. To put it in the simplest terms possible, glycerol is a component of triglycerides (fats and oils) and phospholipids. It’s also a three-carbon source that forms the backbone of fatty acids, and it has the chemical formula of C3H8O3.

Glycerol is naturally occurring in humans and other animals when the metabolic system accesses fat reserves as a source of energy. The glycerol that is formed during this process is released into the bloodstream and converted into glucose by the liver.

It’s also present in the fat cells of various plants (that’s right, plants have fat cells too!), and is often extracted from soybeans and palms. It’s worth pointing out here that, even though glycerol obtained from palms is technically vegan, it’s something most vegans will avoid given the ethical issues that surround palm oil.

How is Glycerol Produced?

There are various ways of producing glycerol and each of them can be used for both animal and plant-obtained glycerol. Some manufacturers produce glycerol through hydrolysis, which uses water molecules to obtain it, while others may use saponification.

Chemical reactions can also be used to produce glycerol and this involves using acids, bases, and catalysts. Glycerol can also be chemically manufactured using propylene, which means that neither animals or plants are used to create it. However, this is quite an expensive process, so it’s quite rarely used in the commercial production of glycerol.

What’s the Difference Between Glycerol, Glycerin, and Glycerine?

Even though they all sound a little different and are interchangeable on ingredient lists, there is very little difference between glycerol, glycerin, and glycerine. ‘Glycerol’ is the official chemical name, while ‘glycerin’ and ‘glycerine’ is the trade name for substances that contain more than 95% of glycerol.

To put it simply, glycerol is the chemical name that referred to a pure form of the compound. Glycerin or glycerine refers to a substance that has a very high proportion of glycerol but is not 100% pure glycerol.

This isn’t really something that needs to be paid too much attention to in the respect of food production and household products, but it is quite important in medical procedures where a treatment may require 100% pure glycerol.

As we’ve mentioned a little earlier on, there is a huge variety of products and applications that glycerol is used for. It’s also used across a wide range of industries. Below, we’ll take a look at some of its most common uses, some of which you may find quite surprising!

This is potentially the most common industry that glycerol is used in. It’s used as a sweetener in various processed foods and can be listed under its E number of E422. It’s also used in food production for its ability to absorb and retain water, which is a useful way of keeping food moist.

It is also used as a thickening agent and is found in loads of different food products including cookies, marshmallows, cakes, and condensed milk.

Another impressive thing about glycerol is that it has antibacterial properties. It’s also been approved for use in treating wounds by the FDA (US Food and Drug Administration).

For this reason, it is incorporated into many lotions and treatments and is even used to package donor skin that is due to be used in skin graft surgery. It can also decrease excess internal pressure in the eyes and has a laxative effect when administered as an enema.

When glycerol is added to liquid and is heated using an atomizer, it produces an aerosol effect, which makes it a good addition to the e-liquids used with e-cigarettes. It can be found in all flavor variations across e-cigarette liquids but, just because you’ve chosen a fruit-flavor, it doesn’t necessarily mean that the glycerol has been sourced from plants.

While it’s never a good idea to try and create your own explosives, it may interest you to know that glycerol is one of the key ingredients used in making nitroglycerin. This is explained in some detail in the 1999 film ‘Fight Club’.

Glycerol is one of the surprising ingredients you’ll find in a tube of bubbles (the type you blow across the room to entertain a child). This is because glycerol can reduce the rate of water evaporation, so it makes bubbles last longer.

The chemical, non-ionic kosmotrope properties of glycerol make it an effective ingredient in antifreeze, as it prevents the formation of ice crystals.

There are uses for glycerol in the film industry. It can be used to create fake tears, as well as preventing areas from drying out too quickly when filing a scene that requires the ground to appear wet on film.

So, we know that glycerol can be made from both animal and plant-based sources. But we also know that it’s quite difficult to determine the source. If you're particularly concerned about the vegan-credentials of glycerol and you’d rather not risk using anything that might contain animal products, there are some vegan alternatives to glycerol you can look out for instead.

There are plenty of vegan products available that can be used to sweeten food, so you don’t always have to depend on glycerol. Sugar does the job perfectly well and, as long as it hasn’t been processed using bone char, it’s a fantastic vegan alternative.

You can also use agave nectar, maple syrup, and coconut nectar as a way to sweeten food without having to put any effort into finding out if glycerol is vegan or not.

A large part of veganism is healthy-eating too, so the more natural your chosen ingredients are the better they will be for you.

Glycerol is often used for treating wounds and burns and, although it may be difficult to determine if its origin is vegan, it’s essential that you follow the advice of a medical professional. If you’ve been prescribed a treatment that contains glycerol, you should absolutely use it.

This advice fits with the ‘as far as is possible and practical’ part of the widely accepted definition of vegan as outlined by The Vegan Society.

There’s no real need to use glycerol to create a decent bubble mix. A simple solution of water and dishwashing detergent will do the job perfectly well, the only downside is that the bubbles may not last as long.

Unfortunately, there’s no real way to tell if glycerol is vegan. If it’s been listed on a product that is certified vegan, then it’s safe to say that it’s been created using plant-based sources. However, if it isn’t certified vegan, there is a strong possibility that it has been made using animal fats, and so it should be avoided.

Of course, you can always contact the brand themselves and ask whether the glycerol is vegan or not. It may take a little while to get a definitive answer, but it’s something that’s worth doing if you’ve got your heart set on a certain product but want to make sure it’s 100% vegan before purchasing.

It’s really all about using your own judgment. If you’re a strict, Level 5 vegan, then you may want to avoid products that contain glycerol as a rule altogether. Instead, look for alternative sweeteners, such as maple syrup or brown sugar, to add to your food. The only exception to this is medicine. If you’re being treated for a condition with a medicine that contains glycerol, it’s essential that you complete your prescribed course.