Extra gum has been refreshing our mouths since 1984 when Wrigley Company created their first sugar-free product ever. Since the initial launch, Extra has become one of the world’s leading gum products.

Extra gum was also the first chewing gum product not to include an ingredient called saccharin. Instead, it uses a sweetener called NutraSweet, which is considered to be safe for humans and animals. 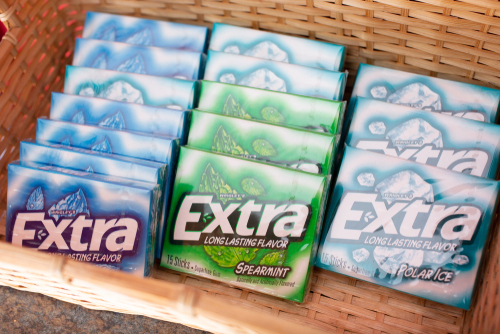 The gum was also said to have a less bitter taste than its predecessors, making it a more enjoyable experience as well. Since then, Extra gum has gone through a number of formula changes and now can boast the fact that it is the first gum product to have the American Dental Association’s Seal of Acceptance.

With all of these impressive accolades under its belt, can Extra gum be enjoyed by vegans as well?

Before 2019, Extra gum contained the following ingredients: gelatin, stearic acid, and glycerin. So, before 2019 Extra gum would not have been considered vegan. However, the new formula that was rolled out in August 2019 has since removed all of these ingredients.

This is true of all of the Extra gum flavors, so every flavor is considered vegan. Extra Chewy Mints and Extra Gum Refreshers are also vegan, so you can feel free to enjoy all of Extra’s products without feeling guilty.

An In-depth Look into the Ingredients

While Extra gum is considered vegan, there are still some ingredients that not everyone will agree with. This includes vegans, vegetarians, and meat-eaters alike, so take a look at this section before popping a new piece of Extra gum into your mouth.

First off, gum does not have the best ingredient list out there. There are questionable components that everyone questions now and then, thinking whether they should put that in their bodies or not.

Here are the Extra gum ingredients, in the flavor Peppermint:

Sugar or sweeteners are the most common ingredients among candies, with Extra gum being no different. Their first ingredient is a sweetener to make your gum taste as nice as possible.

Not everyone agrees with putting sweetener in their bodies, particularly when it is artificially manufactured.

Okay, so you need flavorings to make your gum taste nice. But artificial flavorings are very bad for the body and you don’t know exactly what they’re made from. These could be dangerous to your health and body, so many like to steer clear of them.

The coloring is the last ingredient on the list, but nevertheless, it is there. As the list does not indicate whether it is natural or artificial coloring, we have to assume that it is the latter. Again, you don’t know exactly what you’re putting in your body with artificial colors.

There are a lot of contradicting statements to this question. Wrigleys Extra is owned by Mars, who states that they are in fact cruelty-free. However, they do still sponsor a limited number of studies involving rats, mice, fish, and other aquatic animals.

While this is not directly affecting the gum that you are eating, the parent company is not considered completely cruelty-free. It is up to you whether or not you want to continue using Mar’s products after this, but the involvement in animal testing makes Extra gum not cruelty-free.

Below is a list of companies that Mars owns and therefore who are not cruelty-free by association.

Yes, Wrigleys Extra White Chewing Gum is vegan, however, it can be easy to know this by simply looking at the ingredients list. Like most chewing companies, Wrigleys lists ‘gum base’ rather than the ingredients used to create this base, and this is where the grey area lies for veganism.

But when you do some more research, unlike other companies, Wrigleys use a synthetic formula to create their gum base and this is what makes them vegan.

Yes, as we have established Wrigleys extra white chewing gum is vegan, and in order for something to be vegan, it must also be cruelty free. Unlike other chewing gum companies, Wrigleys have chosen to use a synthetic base for all of their chewing gum products which makes them suitable for vegans.

But it is worth noting that while all Wrigley's chewing gum products are vegan and cruelty free, this is not true of all of their products, so be careful when purchasing their other products. However, if you want to purchase their Extra White Gum then it is good to know that this product is cruelty free.

Is Extra Chewing Gum Made of Plastic?

Whether or not Extra Chewing Gum contains plastic is a bit unclear as the manufacturer, Wrigleys has confirmed that some of their products contain polyvinyl acetate, however, they have not stated which products.

So there is a chance that Extra Chewing Gum, like a lot of other chewing gum products, also contains plastic in its recipe.