Couscous is one of the staple foods of a vegetarian diet. Along with pasta, rice, quinoa, and lentils, it’s often used as a way to bring carbohydrates to your plate and give everything a little more of a warming, comfort food feel.

But is couscous vegan? There may seem like an obvious answer to this question, but with so many food products claiming to be plant-based, but still containing animal by-products either in the ingredients or manufacturing process, it’s a fair question to ask. 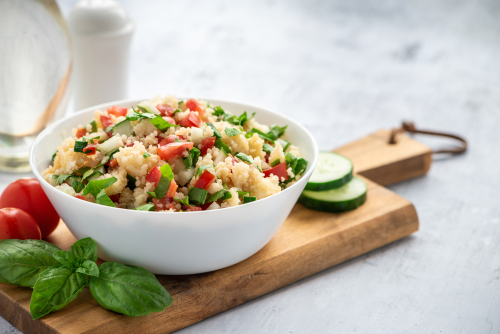 So, while it’s safe to assume that couscous vegan, it’s worth looking into it in a little more detail, just so that you can be 100% certain. And that’s what we’re here to do!

Below, we’ll take an in-depth look at couscous, its vegan credentials, and the nutritional value it has to offer. We’ll also explore any nutritional issues that anybody following a vegan diet should be aware of before eating couscous, taking all of the guesswork out of it, and ensuring you’re able to create the vegan meal of your dreams.

Contents hide
1 Is Couscous Vegan-Friendly?
2 Should Vegans Eat Couscous?
3 Couscous Nutritional Information
4 Couscous VS. Other Sources Of Carbohydrates
4.1 Pasta
4.2 Rice & Quinoa
5 What Is Couscous?
6 How Is Couscous Made?
7 How To Make Your Own Couscous
7.1 Ingredients:
7.2 Method:
8 Conclusion

Traditionally, couscous was made using a mixture of durum wheat, semolina, and salted water. And, in fact, this is how it is still made today. Since all of these ingredients are totally vegan, we can safely say (again) that couscous is 100% vegan.

Since couscous is vegan, there’s no reason why you can’t incorporate it into a vegan diet. Whether you should eat it or not is really up to you. Couscous is also a really good choice for anybody trying to lead a healthier lifestyle.

But what does ‘healthy’ even mean, anymore? It seems as though healthy foods can gain and lose their credentials on a weekly basis these days, which basically means there’s no real fixed definition of what ‘healthy’ is.

However, what we can do is provide you with a list of nutrition facts about couscous, and this will allow you to make your own mind up about whether or not you should eat couscous.

There can be a variation in the nutritional information of couscous depending on the specific wheat used in its creation and the amount you’re cooking. However, the figures below are taken from the US Department of Agriculture and are based on a 100g serving.

Unless you’re a qualified nutritionist, there’s a strong chance most of the information above won’t really make too much sense. So, to make things a little clearer, let’s take a look at some of the benefits eating a standard 100g serving of couscous has.

All of the above information points to one thing - it’s a really healthy addition to any diet, whether it is vegan or not. And, as well as the main nutrients your body needs every day, it’s also packed with a plethora of micronutrients.

It’s also a great source of both zinc and iron, which are two minerals that a lot of vegans struggle to fit into their diet. This means that you won’t have to worry about purchasing zinc or iron supplements anymore either, so you can even save a little money by eating more couscous!

Of course, couscous on its own isn’t enough to cover your entire daily zinc and iron needs. But, when you use it as part of a delicious meal alongside ingredients such as spinach, nuts, and seeds, you’ll soon be on your way!

Couscous VS. Other Sources Of Carbohydrates

OK, so we know that couscous is packed with zinc, iron, and it’s also a great source of protein. However, the majority of its calories come from complex carbohydrates. But how does it compare to other carbohydrate-packed ingredients such as pasta, rice, and quinoa?

This is where the bad news comes in. While couscous is generally a fantastic addition to any vegan meal, there is evidence to suggest that other ingredients may be better for you.

Couscous is considered to be a grain but, in actual fact, it’s not a grain at all as it is made from flour. Of course, you can make things a little healthier for yourself by choosing wholegrain couscous, which is made with whole grain flour.

Let’s explore the different sources of carbohydrates below and see how they measure up against couscous. We’ll also take a look at their vegan-friendliness which, ultimately, will determine whether or not they are a suitable choice for a vegan diet.

There aren’t very many people that don’t like pasta and, as far as nutritional information goes, there isn’t a lot of difference between pasta and couscous. This makes a lot of sense when you consider that both are made from wheat and, in some countries, couscous is even thought of as a type of pasta.

However, the difference between the two lies in their ingredients. Pasta is traditionally made using eggs and, as such, it is not suitable for vegans. However, you can purchase egg-free, vegan pastas by choosing the wholewheat varieties.

Since they are both so similar, it’s fair to say that neither pasta or couscous is as healthy as you might imagine. However, this really lies in the type of pasta and couscous you choose, as whole grain versions of both are significantly healthier in the following ways:

By choosing wholegrain pasta or whole grain couscous, you’ll be getting an excellent source of protein. This is another thing that many vegans struggle with getting into their diet. And, while both are still quite high in carbohydrates, many vegans see this as a fair trade for the high protein content.

If you’re particularly interested in increasing your protein intake, then quinoa and rice might be a better choice for you than couscous. 100g of couscous contains 12.76g of protein, while quinoa contains more than 14g. Even more impressively, both wild and spelt rice contain over 15g of protein per serving.

You might be thinking that there’s not a massive difference between all three, since there’s really only 3 grams in it. However, these 3 grams add up to almost 20% more protein than you get from couscous.

There’s a similar difference when we look at the levels of fiber between all three, as well. And, when it comes to zinc and iron levels, rice outshines couscous by more than 50% while quinoa takes those figures even higher.

There’s a reason why quinoa is regarded as a superfood and it proves it when you compare it to couscous. Quinoa has more than double the amount of calcium, four times the amount of iron, four times as much zinc, and it even contains vitamins and minerals that couscous doesn’t even have trace amounts of.

So, to summarize, while couscous is undeniably a great, healthy vegan food, there are similar ingredients that hold higher nutritional numbers. However, let’s be honest, nobody really wants to eat bowlfuls of quinoa every day! Remember, it’s all about balance.

We know it’s vegan and we know it’s healthy, albeit not as healthy as some of its alternatives. But what exactly is couscous?

We also know that it is a combination of wheat, water, and salt, but to answer this question more thoroughly, we need to travel back in time. To 200BC to be exact!

Evidence would suggest that couscous was almost certainly invented by the Berbers, an ethnic group from North Africa with its origins most likely coming from either Morocco or Algeria. Fast forward a couple of thousand years and couscous is now an ingredient that is enjoyed all over the world.

How Is Couscous Made?

Just like pasta, couscous is one of the simplest doughs and it’s made from wheat rather than being a plant or a grain in its own right. The dough used to make couscous is a very basic mixture of wheat, water, and salt. However, unlike some pasta, it can always claim to be vegan since there are no eggs used in its construction.

These days, the grain-like consistency of couscous is achieved through the marvel of modern machinery. However, traditionally, it would have been rubbed together into a crumb-like texture using the fingers, much like rubbing butter and flour together.

How To Make Your Own Couscous

It’s fair to say that we’re all becoming increasingly aware of the ingredients we’re putting into our bodies. As such, the revolution of home-cooking has really taken off. But can you make your own couscous? Yes, you can, and it’s really simple!

Here’s how to make your own couscous:

That’s all there is to it! You can then steam the semolina or simply cover it with boiling water and allow it to absorb it, which will cook the couscous at the same time.

We’re certain that you’ll have learned everything there is to know about couscous throughout this article. However, the main takeaway is that couscous is absolutely, 100% vegan. It’s also a great source of protein, fiber, complex carbohydrates, iron, zinc, and other essential minerals that many vegans find difficult to get from a plant-based diet.

However, it is also important to note that there are some other ingredients that are just as healthy and, in some cases, even healthier than couscous. Quinoa is at the top of this list and has almost double the nutritional value of couscous, as well as being vegan.

But, as we’ve said before, life is about balance and there’s no reason why you can’t enjoy couscous, quinoa, rice, and pasta as part of a balanced vegan diet. And, if one thing is true about couscous that you can’t say about the rest, it’s that it absolutely drinks up any flavor you use to cook it with. So, not only is it healthy, but it has the potential to be one of the most delicious ingredients you can keep in your kitchen.