Trying to avoid foods with animal-based ingredients is a constant struggle when you’re following a vegan diet. There are even some things that you might put in your mouth out of habit, without giving a second thought as to whether or not they are vegan. Chewing gum is probably the most common of these.

While chewing gum doesn’t make up a huge part of your diet, and you should never swallow it, it’s vegan-credentials aren’t something that a lot of vegans pay much attention to. However, it is something that is worth knowing if you’re dedicated to a plant-based lifestyle. 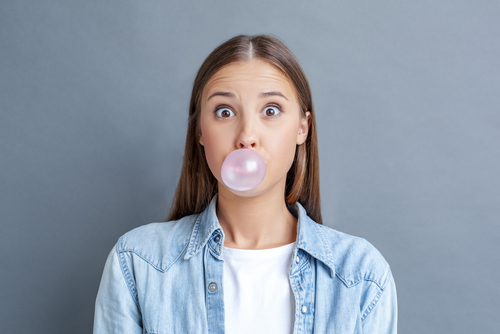 Below, we’ll take a look at chewing gum and bubble gum and what exactly goes into making it. So, is chewing gum vegan? Keep reading to find out!

What are the Ingredients in Chewing Gum?

This is something that has been surrounded by rumors and false information for many years. In fact, if you were to ask anybody what they think go into making chewing gum, ‘whale’ is bound to be one of the answers thrown out there. This is, of course, incorrect, and no chewing gum available today is made from whale.

The main component in chewing gum is an artificial gum base, which is usually made from a mixture of natural and synthetic materials, most of which you’re highly unlikely to ever find in your local grocery store.

Sounds delicious, right? Well, while the ingredients aren’t exactly paleolithic, it’s this mixture of natural and synthetic materials that make most chewing gum brands vegan-friendly. There are exceptions to this rule, however, and some do contain a small amount of animal-derived ingredients.

But, for the most part, chewing gum is vegan.

But does this mean that all chewing is vegan? Unfortunately, no, it doesn’t. And, to make things worse, a lot of chewing gum brands don’t bother to state their vegan-credentials on their packaging. There’s only a small amount of space to fill, after all, and that is seemingly better taken up by flashy logos.

Factor in your undoubtedly busy lifestyle, and finding out if a chewing is vegan or not becomes even harder. Who’s got the time to stand at a cash register, having picked up a pack of chewing gum on a whim, and frantically search through the tiny writing to find out if it contains any animal products? Nobody, that’s who!

So, to make things easier, we’ve listed all of the brands that offer vegan chewing gum products below:

You'll notice that for some of these chewing gum brands, there are only certain varieties that are vegan. We’ll look at these in more detail below but, for now, sticking to any of the above options is the safest bet.

It’s also highly unlikely that a chewing gum brand will switch its products from vegan to non-vegan, so the choices above will keep you covered for many years to come.

It’s also important to note which chewing gum brands are not vegan. This will help you steer clear of them and ensure that you’re not consuming any animal products without realizing.

Of course, over time there is a chance that these brands and varieties may switch to using only plant-based ingredients in the future. But, for now, it’s worth sticking to the list above if you want a guaranteed-vegan chewing gum.

Here is a list of the brands and varieties that currently use animal-derived products to make chewing gum:

Why Are Some Chewing Gums Not Vegan?

As with most mass-produced products, the vegan-waters that surround chewing gum are often muddy. Many popular brands bring out products that are vegan alongside other non-vegan products, which makes it quite difficult to differentiate between them.

Chewing gum brands are fairly notorious for not labeling their products as vegan either, which makes it even harder to tell whether the gum you’re thinking of purchasing is vegan or not. This is why it’s essential to know what ingredients used in chewing gum are not vegan.

Below, we’ll take a look at some of the non-vegan ingredients that you might spot on a pack of chewing gum. This will help you avoid anything that contains animal products and make it easier to spot those that are truly vegan.

This is one of the better-known non-vegans ingredients, and you may already be avoiding certain products that contain gelatine. It is derived from various parts of one or more animals, most typically from the hooves, skins, hide, and bones of pigs and cows.

When gelatine is added to any food product, it immediately loses it’s vegan-credentials. It also becomes unsuitable for vegetarian consumption since it is actually a part of an animal.

The reason some chewing gum brands use gelatine is that it gives the gum its chewy texture. It also helps to bind the rest of the ingredients together to form the ‘pellet’ shape that we’ve become familiar with.

If you’ve ever wondered how certain varieties of chewing gum and bubble gum get their color, the answer could be that they contain carmine. This is a red food dye that is derived from the cochineal insect. And, just to make things a little more difficult, carmine can be listed in a number of different ways.

If a chewing gum brand contains carmine, it may be stated on the label in any of the following terms:

It’s highly unlikely that you’ll ever be able to remember the huge number of pseudonyms that carmine masquerades under, so, the easiest way to avoid it is this; if the chewing gum seems unnaturally red, get in contact with the brand’s customer support team. They will be able to tell you if it’s carmine or if it’s a plant-based food dye.

This is an ingredient that often needs a little research, as it can be made from either animal or plant-based materials. It’s often added to chewing gum as a sweetener alongside xylitol. and, like carmine, it can be listed under an array of different names. These include:

It’s difficult to tell how glycerine used in chewing gum is made. If it’s a vegan brand, it will most likely be from soybeans or other plant-based sources. This is usually stated on the ingredient list, too. If it’s not a vegan brand of chewing gum, or if it doesn’t state that it’s made from soy, the glycerine could have been made from tallow (animal fat).

Again, if there is any doubt in your mind, it’s always worth getting in touch with the brand. They will be able to tell your origin of the glycerine, and you’ll be able to determine from there whether or not it is vegan.

Stearic acid is used as an additive to thicken the texture of some chewing gums and add to their elasticity. As is the case with glycerine, it can be made from both plant and animal products as it occurs naturally in high quantities in animal fats and cocoa butter.

Lecithin is yet another ingredient that can be created using both animal and plant sources, so it’s another important one for anybody following the vegan lifestyle to look into.

It was initially isolated from eggs, with the name ‘Lecithin’ coming from the Greek word for ‘egg yolk’. However, it can also be made from soy, rapeseed, and sunflower seeds. So, again, unless the source is stated on the ingredients list, it’s something you’ll need to ask the brand about.

In chewing gum, lecithin is used as a softener, in a similar way to stearic acid, and adds texture and elasticity to the gum. It may also be listed on the pack under its E number, which is E322.

It’s safe to say that, when it comes to chewing gum, the majority of brands and varieties are vegan. However, it’s still worth checking out the ingredients list and making sure that it doesn’t contain any of the potentially non-vegan products we’ve listed above.

Even if it does, there is still a chance that these ingredients are created from plant-based sources. While this adds confusion and can take a little extra effort looking into, it’s worth doing to make sure that you’ve chosen a chewing gum that is 100% vegan.

And, if you’re ever unsure, you can simply check out our list of vegan and non-vegan chewing gum brands. Doing this will leave you with minty-fresh breath, without having harmed any animals in the process.