One of the most debated subjects around vegetarianism is whether or not tuna can be included as part of the diet. But, with so many different opinions on the subject, can vegetarians actually eat tuna?

In short, no. Since vegetarianism is based around eating no meat or fish products, tuna cannot be included as a part of the vegetarian diet. 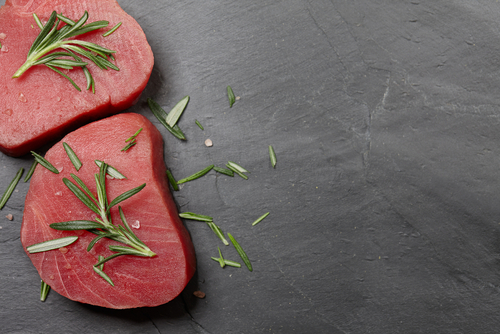 So, to put it simply, if you wanted to follow a vegetarian diet but still want to eat tuna and other seafood products, you’ll need to become a pescatarian rather than a vegetarian.

With that being said, if you want to become a strict vegetarian but would still like to enjoy the flavor and texture of tuna, there are some vegetarian alternatives available.

Below, we’ve listed some of the best plant-based alternatives to tuna, each of which is just like eating the real thing but without taking you away from your vegetarian lifestyle.

One of the best plant-based tuna alternatives comes from Good Catch. This vegetarian brand uses a mixture of peas, chickpeas, lentils, soybeans, fava beans, and navy beans that come together to produce an incredibly realistic tuna alternative in both texture and flavor.

Good Catch offers three flavors of their fish-free tuna; “Naked in Water”, “Mediterranean”, and “Oil & Herbs”. This doesn’t only spoil you for choice, but also gives you the ability to use this vegetarian tuna alternative in a variety of dishes.

Created from non-GMO soy protein for that tuna-like texture, Tuno from Loma Linda is another fantastic plant-based tuna alternative. It also contains seaweed to give it a super realistic seafood taste.

You’ve got a wide range of flavor options from Loma Linda’s Tuno as well. The canned options are “Tuno in Spring Water”, “Lemon Pepper” and, if you really enjoy a spicy kick, “Tuno with Sriracha”.

Tuno also comes in packets, and the available flavor options here are “Thai Sweet Chili”, Lemon Pepper”, and “Sesame Ginger”. All canned and packet options are vegan-friendly too, so the only thing you’ll need to worry about is choosing which flavor to try first!

One of the best things about Sophie’s Kitchen is that they don’t only offer delicious plant-based tuna alternatives, but they’ve also created vegetarian-friendly crab cakes, fish fillets, salmon, and even shrimp!

Their famous “Toona” is created using pea protein and pea starch to give it a realistic texture, while its flavor comes from seaweed powder. This fantastic plant-based tuna alternative comes in two flavor choices - “Black Pepper” and “Sea Salt”.

It’s that easy! Store in an airtight container and it will last in a refrigerator for up to 5 days.

To conclude and finally answer that age-old question of whether vegetarians can eat tuna, the answer is no. However, with so many realistic plant-based alternatives available, there’s no need to feel as though you’re missing out!

Just choose from one of the brands above or make your own and you’ll be getting the taste and texture of the real thing without having harmed any fish in the process.