Tootsie Rolls, Tootsie Fruit Chews, and Tootsie Pops are amongst the world’s most popular candies. However, over the last few years, as more and more people have started adopting the vegan lifestyle, the vegan-friendliness of these delicious treats has been called into question. 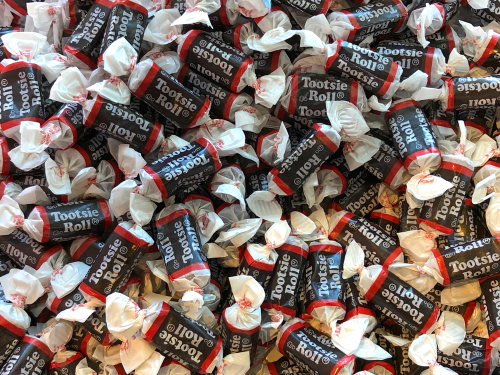 So, are Tootsie Rolls, Fruit Chews, or Pops vegan? We decided to find out once and for all! Below, we’ll take a look at each of these candies and dive deeper into their vegan credentials.

Let’s start with the most famous of the three; Tootsie Rolls. Surprisingly for a candy product, Tootsie Rolls contain very few ingredients. However, there are two ingredients that go into making these sweet treats that, unfortunately, are not vegan.

It’s the condensed skimmed milk and whey that make Tootsie Rolls an unsuitable choice of candy for vegans. So, if you’re looking to get a chocolatey, taffy-like fix to satisfy your sweet tooth, you’ll need to look elsewhere!

With a name like ‘Fruit Chews’, you’d expect this candy to be totally vegan. However, as with Tootsie Rolls, Tootsie Fruit Chews also contain ingredients that aren’t suitable for vegans.

Let’s take a look at everything that goes into making Tootsie Fruit Chews below:

Again, it’s the condensed skimmed milk and whey used to make Tootsie Fruit Chews that takes away their vegan credentials. It’s important to note here, also, that Tootsie Fruit Chew Pops are made using the same ingredients, so they aren’t vegan either.

So, we know that neither Tootsie Rolls nor Tootsie Fruit Chews are vegan. But how about Tootsie Pops? Unfortunately, due to the inclusion of condensed skimmed milk and whey, Tootsie Pops are also not a suitable choice for anybody looking for a sweet vegan treat.

Below, you’ll find all of the ingredients used for making Tootsie Pops:

As with Tootsie Fruit Chew Pops, all variations of Tootsie Pops are unsuitable for vegans as well. This includes Tootsie Pops Minis, Tootsie Pop Drops, and Tootsie Bunch Pops.

As well as whey and condensed milk, there are some controversial ingredients that are used in the production of Tootsie Rolls, Fruit Chews, and Pops. And, while these ingredients are considered plant-based, they come with issues that would make any vegan think twice about eating them.

You may have spotted a few of these while looking through the ingredients list above, but some are more obvious than others. Let’s take a look at the controversial vegan ingredients below.

While sugar itself is considered vegan, it remains a controversial ingredient amongst the vegan community. This is because refined cane sugar is often processed using bone char, which helps to give it the purest white color possible.

Once the sugar has been processed, there are never any bone particles left behind, but the method still uses animal byproducts. Therefore, it’s not vegan.

With Tootsie Rolls, Fruit Chews, and Pops, the method used for processing the sugar found in their ingredients is never stated. This is actually a common occurrence with candy, even those that claim to be vegan-friendly.

Even though you’re not going to be able to eat Tootsie Rolls, Fruit Chews, and Pops if you’re vegan due to the milk and whey that is used to make them, it’s always worth researching how the sugar used in other candy products has been processed before you purchase.

Palm oil and palm fat are produced using the fruit of the palm tree, which technically makes them vegan. However, there are some ethical issues surrounding palm oil and palm fat that need to be considered, especially by those following a vegan diet.

The most controversial issue surrounding palm oil production is deforestation. Palm oil is in almost every product, and it even turns up in some that you might not expect to find it in. And, as the demand for palm oil increases, the need to clear large amounts of rainforest to farm it in has also increased.

This has led to deforestation which, in turn, has led to the demise of several species’ natural habitats.

Again, while Tootsie Rolls, Fruit Chews, and Pops aren’t vegan, the palm oil used to produce many vegan-friendly products is something that is worth looking into as well.

With the exception of Carmine. there aren’t many artificial colors that are non-vegan. However, the controversy lies within the testing of the colors.

Manu artificial food colors are tested on animals before they are certified as safe to use in food products. While this isn’t the cast for Tootsie Rolls, Fruit Chews, and Pops, it’s another important thing for any vegan to look into.

If the vegan candy you’re looking for states it is cruelty-free, then the colors used to make it won’t have been tested on animals. If it doesn’t, then it’s a good idea to contact the brand’s customer support team to find out.

Having looked into the ingredients used to make Tootsie Rolls, Fruit Chews, and Pops, we can see that they aren’t vegan. This is because each of them contains condensed skimmed milk and whey.

However, while Tootsie Rolls, Fruit Chews, and Pops aren’t vegan-friendly, they contain no meat products and, therefore, they are a suitable candy choice for vegetarians.

Tootsie Rolls, Fruit Chews, and Pops all contain condensed skimmed milk and whey. So, while this means they are unsuitable for vegans, they can still be enjoyed by vegetarians. However, it’s worth noting that, since they contain milk-based ingredients, they should be avoided by anybody with a dairy allergy.

Yes, Tootsie Rolls are completely gluten-free. They don’t contain any wheat, barley, rye, oats, triticale, or spelt. Corn and soy are used in their production, but since these are non-gluten-containing ingredients, they are safe for people with gluten intolerances or allergies to consume.

All Tootsie Rolls, Fruit Chews, and Pops are made using condensed skimmed milk and whey. This means that they are not dairy-free and should therefore be avoided by anybody with a dairy allergy. Since they all contain dairy, they are also not suitable for vegans.