SweeTarts are small round candies that are both sweet and sour. They are produced by Willy Wonka Candy Company by Nestle. Originally only coming in a hard candy form, there are now plenty of new variations of SweeTarts on the market. 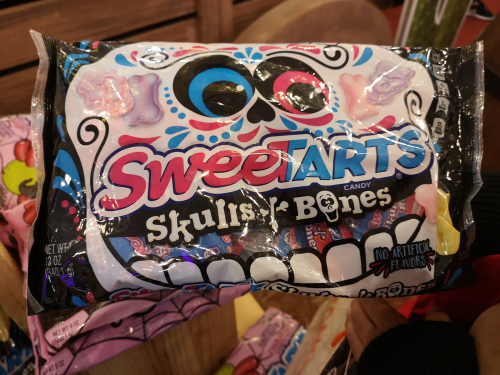 They are powdery, brightly colored candies that were created to be a less messy form of Pixy Stix and Lik-M-Aid. These are also popular candies that are sweet and sour, but they are much harder to eat than the revolutionary SweeTarts.

Today we will be answering the much-anticipated question: are SweeTarts vegan-friendly?

Original SweeTarts are shaped like hockey pucks and hard, powdery sweet and sour candies. They are brightly colored and a popular favorite among children and adults alike.

SweeTarts also have a seasonal option that is released to stores around Easter that are shaped like chicks, ducks, and bunnies. These are also vegan-friendly.

Chewy SweeTarts are also sweet and sour, but they are made up of a soft chewy candy center with a crunchy shell. They are likened to Skittles yet still maintain their powder-colored exteriors.

There are five varieties of Chewy SweeTarts, which are listed below:

Unfortunately, all of the varieties of Chewy SweeTarts contain an animal-derived product called Egg Albumen, which is otherwise known as Egg Whites. So, none of the Chewy SweeTarts on the market are vegan-friendly.

SweeTarts Gummies are the same as all of the other varieties that we have looked at but in a gummy form. They have clear gummy candy on the top with a foamy layer on the bottom.

Unlike Chewy SweeTarts, most of these varieties come with different ingredient lists. So, we have to look at all of them to determine which, if any, are vegan-friendly. This is important to note because even if one is vegan-friendly, that does not mean that the other Gummies are.

Three of the SweeTarts Gummies contain gelatin in the ingredients list - Gummies, Sour Gummies, and Whipped and Tangy. Gelatin is defined as: ‘a protein procured by boiling animal skin, tendons, cartilage, ligaments, and/or bones in water. It’s usually obtained from cows, pigs, or fish’. This is defined by PETA.

So, gelatin is an animal-derived product and therefore cannot be considered vegan-friendly. Therefore SweeTarts Gummies, Sour Gummies, and Whipped and Tangy are not vegan and should not be consumed when following a vegan diet.

Now that we have discovered which SweeTarts are vegan-friendly and which are not, it’s worth noting that there are other controversial ingredients that we haven’t mentioned yet. While these are not considered not vegan-friendly per se, you should give them some thought before consuming them.

Sugar is the most commonly found ingredient within candy, but many people don’t know that sugar is actually controversial for vegans. This is down to how refined cane sugar is processed.

Bone char is used to bleach the sugar during the refining process to create a pure white color. All of the bone char is then removed before it is sold and used in foods. However, some vegans do not agree with the method as it uses animal-derived products.

Palm oil and fat is another controversial ingredient because the cultivation of the oil is causing deforestation and other devastating impacts on the environment. Many species are losing their homes and therefore becoming extinct because of how fast palm oil is being harvested.

While not strictly considered not vegan, many choose to steer away from it in a bid to prevent aiding deforestation.

Flavorings can be both artificially made and naturally sourced, both from plants and animals. Natural flavors in candy normally come from plant sources, but we cannot be sure due to SweeTarts not disclosing this information.

To sum up, Original SweeTarts and SweeTarts Soft Bites are the only vegan-friendly candies from this brand. Chewy SweeTarts, SweeTart Gummies, Sour Gummies, and Whipped and Tangy, and SweeTart Ropes are not considered vegan.

There are also a number of controversial ingredients within the ingredients lists that vegans should be wary of. Palm oil, sugar, and food colorings are among those that need to be considered before consuming due to their potential not to be vegan-friendly.