Swedish Fish is a candy made up of gummy chews that are shaped like fish. They were first developed in the 1950s and continue to dominate the market today, being especially popular in the United States.

Swedish Fish is now manufactured by Mondelēz International in both Canada and Turkey. When Swedish Fish first came about, they were red in color and had one flavor specific to the candy. 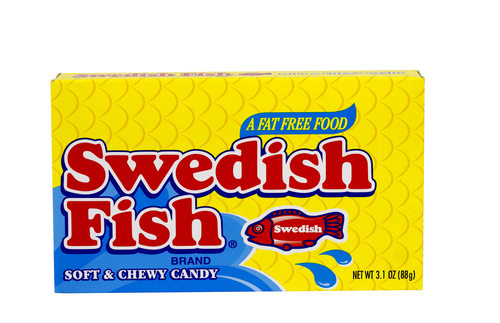 The original Swedish Fish can come in two types of packaging, which interestingly alters the ingredients. We are not too sure why this happens, but we have listed the two ingredients lists below so that you can be sure what you’re consuming depending on the packaging.

Palm oil is a controversial ingredient within the vegan community, which we will discuss later in our article. Beeswax is also not considered vegan because it is an animal-derived product. However, all of the ingredients in the regular packaging make Swedish Fish vegan-friendly.

So, Swedish Fish Originals are normally vegan, but always check the packaging to make sure that the ingredients list doesn’t contain beeswax.

Assorted Swedish Fish are the same as the original alternatives, with chewy candies in the shape of fish. The only difference is that the assorted candy has different colored and flavored fish rather than just the red ones.

The colors include red, orange, yellow, and green, and the most popular flavors are Orange and Lemon-Lime.

Unlike the Original Swedish Fish, the assorted version does not change ingredients depending on the packaging. Both the assorted Swedish Fish in the regular packaging and the peg bag packaging are vegan-friendly and therefore can be consumed when following a vegan diet.

Although the majority of the Swedish Fish that we have looked at above are vegan-friendly, there are still a few controversial ingredients that some vegans would steer clear of when choosing what to consume.

These controversial ingredients are listed below:

Sugar is often not thought of as a controversial ingredient when it comes to veganism, but it actually can be a cause for concern. Refined cane sugar is the culprit here, with the refining process using bone char to get the sugar as white as snow.

Once the refining process has been completed, all of the bone char is removed and none is leftover. However, some vegans decide not to consume refined cane sugar because of the methods used to create it.

Sugar is the main ingredient in the majority of candies, so it is up to you whether you follow this rule or not. Many types of candy don’t name which sugar they use in their formula, which is exactly what Swedish Fish does as well.

So, we don’t know whether the sugar used in Swedish Fish is vegan-friendly or not. We are deciding to give it the benefit of the doubt, but you need to decide where your opinion lies.

Palm oil is also used within the formula of Swedish Fish. While palm oil is not a direct animal-derived product and therefore still considered vegan, many vegans decide not to consume it to prevent the cultivation of it.

Farming palm oil is to cut down large trees which is the habitat of many species, and as a result, are putting them on the endangered list. Orangutans are the most notable species losing their homes and therefore dying from the cultivation of palm oil.

Again, it is up to you whether you decide to consume palm oil or not. However, we think that it is important for more people to understand the effects of palm oil on the environment.

Again, we are giving Swedish Fish the benefit of the doubt and assuming that the food coloring within the formula of this candy is vegan-friendly. However, you are the only one that can make your mind up on this one.

Flavorings found in candies are most commonly found in plant sources, but we think that it is worth noting that Swedish Fish does not note which flavorings they use and whether they’re natural or artificial.

Artificial flavorings are almost always vegan-friendly, but natural flavorings can be derived from animals or plants. Again, the majority of candies use plant-derived flavorings. Again, this is another thing you need to consider and draw your own opinion upon.

Are Swedish Fish made with gelatin?

No, according to the ingredients lists of all the types of Swedish Fish, none of them are made with gelatin.

So, make sure that you check the packaging before picking up a bag of Swedish Fish. There are a number of controversial ingredients within the Swedish Fish formulas, so you can cast your own judgments on these before deciding whether you are going to include Swedish Fish in your vegan diet.