Snyder’s Pretzels are a popular brand of pretzels that can be considered one of the market leaders in the USA. 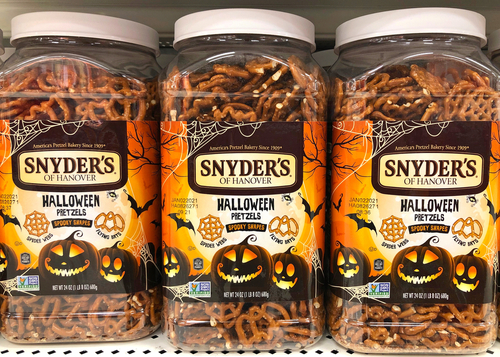 Out of all of these varieties, there is only one that is not vegan-friendly. Butter Snaps contain a natural flavor made up of enzyme-modified butterfat, which is obviously derived from animal products and therefore not vegan-friendly.

So, we can happily say that there are twelve varieties of Snyder’s Traditional Pretzels that are vegan. These are as follows:

Looking at the flavor options, it doesn’t surprise us much that five of the nine are not considered vegan as they contain animal-derived ingredients. Parmesan Garlic, Salted Caramel, Honey Mustard and Onion, Cheddar Cheese, and Buttermilk Ranch are all non-vegan.

The four flavors that are left are all vegan-friendly due to the lack of animal products within the ingredients list. These are as follows:

Only one of these varieties is not considered vegan-friendly, which is the Honey Mustard and Onion Sticks. They contain honey powder and therefore are not vegan. People who follow a vegan diet believe that bees have been put into distress due to collecting their honey.

So, there are five varieties of Snyder’s Gluten-Free Pretzels that are vegan-friendly, which are as follows:

The other two varieties are vegan, which are as follows:

As you might have already guessed, neither of these varieties is vegan-friendly. Chocolate and Cheese both contain animal products and therefore are not suitable for a vegan diet.