With such a popular candy comes lots of questions about them, with the most common and recent being if they are vegan or not. 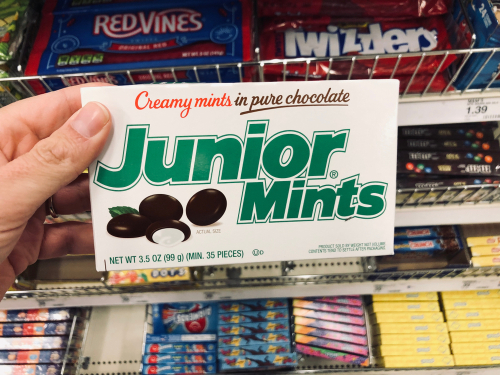 Today we will be looking into whether Junior Mints can be incorporated into a vegan diet, as well as answering a number of other burning questions about the breath-freshening candy.

It depends on whether you consider insect-derived products to be not friendly to the vegan diet. Some are against it while others don’t see the harm in it. It is up to you on which side of the spectrum you sit upon.

No matter whether you consider the Confectioner’s Glaze to be a dealbreaker or not, there are a few other ingredients that are considered to be controversial to vegans. Although not strictly ‘not vegan’, these ingredients might take Junior Mints off of your shopping list.

It is not known what kind of sugar is used to create Junior Mints, so it’s up to you whether you will consume the candy without knowing the type of sugar within them.

What About Junior Mints Deluxe?

Milk is certainly not vegan-friendly as it is a product that comes from cows. There are plenty of vegan-friendly alternatives to milk out there, such as soy and oat milk. However, as the Junior Mints Deluxe ingredients list does not suggest that it uses a milk substitute, we can assume that it is animal’s milk and therefore not vegan.

What About Junior Caramels?

Junior Caramels are similar to the original Junior Mints, although instead of having a minty paste inside of the chocolate, there is soft caramel. Furthermore, the chocolate casing is made from milk chocolate rather than dark chocolate. But can vegans consume these candies?

Perhaps the least vegan-friendly candy in the Junior Mints family, Junior Caramels have plenty of non-vegan friendly ingredients within a short ingredients list. Let’s take a quick look into the different ingredients (that we haven’t looked at already) and why they are not considered vegan friendly.

There are four milk products within the Junior Caramel ingredients list - Milk Chocolate, Milk, Dry Whole Milk, and Whey. As these are products, or use products, that come from dairy and therefore cows, these are definitely not vegan-friendly.

Palm oil is a product that is often added to food and other perishables to stop them from going bad so quickly. It has been used for a long time without anyone batting an eyelid, until recently when it was relieved that harvesting palm oil was a leading cause of deforestation.

Orangutans are just one of the species that are becoming extinct due to the harvesting of palm oil. For this reason, many people who follow a vegan diet have now cut it out of their diets.

Junior Mints, both Original and Mini options, are dairy-free. However, there is the potential that the candy could be cross-contaminated with milk or egg from other products within the factory. So, if cross-contamination is a no-go for you, we suggest steering away from Junior Mints.

Junior Mints Deluxe and Junior Caramels are not dairy-free as they both contain milk products. This is the reason why both of these products are non-vegan friendly and not dairy-free.

All in all, there are no Junior Mints products that can be defined as vegan friendly. Junior Mints, both Original and Mini, contain insect products. Junior Mints Deluxe contains milk which makes them not vegan, and Junior Caramels contain plenty of non-vegan components.

Depending on whether you consider insect products vegan-friendly or not will determine whether Junior Mints are okay in your diet. However, the majority of vegans do not consider this vegan friendly.

There are plenty of controversial ingredients within all of the ingredients lists that we’ve looked at today, so we suggest vegans keep well away from Junior Mints products.

What are Junior Mints made of?

Most mints are made from a combination of sugar, mint flavoring, and some kind of binding agent. But, as Junior Mints have a chocolate coating there are a few extra ingredients in them. Here are the ingredients of Junior Mints:

Junior Mints are mostly made from flavorings, sugar, and a sweet kind of chocolate. There are several different types of Junior Mints. But these all have very similar ingredients. The only difference is in Junior Caramels. But these are not mints.

What mints are vegan?

It’s easy to assume that pretty much all mints are vegan. But, this isn’t always the case. So make sure to always double-check the ingredients.

Here are just a few brands of mints that are vegan:

The shortness of this list is probably surprising. But, there are some mints that contain animal products. Some mints aren’t even vegetarian.

For example, only green apple flavored Mentos are vegan. All other Mento flavors contain beeswax. This is an ingredient that is often ignored but it definitely isn’t vegan. Altoids are also not vegan as they contain gelatin.

Which candy is vegan?

Although Junior Mints, and lots of other mints, aren’t vegan. But there are luckily lots of other vegan candies! We’re sure that you don’t think very much candy is healthy. So it won’t surprise you to learn that most candies are made from sugar, flavorings, and a binding agent. The ingredient that is most commonly non-vegan is the flavorings.

Here is a list of some of the best vegan candies:

Although it might be difficult to find vegan mints, there are lots of other vegan candies available. Plus, there are still a couple of vegan mints that you should be able to easily find.