When living a vegan lifestyle, it can be hard to find foods that suit your dietary needs, but also hard to distinguish which foods are naturally vegan, and which are not.

This means being particularly vigilant about what ingredients, allergens and processes go into making your favorite foods. 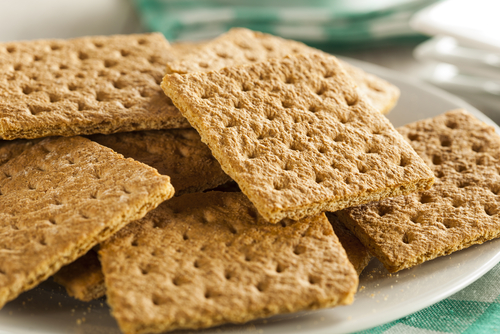 One of the most popular and most commonly asked questions about vegan foods is whether graham crackers are vegan. These are a much favored snack food beloved by many.

So, what are graham crackers, and are they vegan?

What are Graham Crackers?

Graham Crackers were originally made for the group of people called Grahamites that followed the preacher Sylvester Graham. These people are widely considered as part of one of the first vegetarian movements in the United States.

Nowadays, graham crackers are a sweet, cinnamon flavored cracker that is most often enjoyed as a snack food. These are most commonly made with graham flour, enriched flour, oil, salt and molasses.

Therefore, there are generally no dairy products used in the production of graham crackers. However, some brands will have different flavors, or will use honey as a sweetener, which may throw its vegan-friendliness into question.

Typically speaking, graham crackers are in fact vegan, as they are made with no animal or dairy products and ingredients, unless honey is added to the list. However, whether graham crackers are completely 100% vegan will vary by which brand you choose.

Luckily, we have produced a guide of all of the best vegan graham crackers!

Which Graham Crackers are Vegan?

We have gathered all of the best vegan graham crackers on the market, to help you find the ones you want to eat, and the brands you will want to avoid!

One of the most popular graham crackers brands are Nabisco's Original Grahams. These are a great option as they contain no animal or dairy products and are widely available across the United States.

With the Original Graham Crackers from Nabisco, the ingredients are:

In addition to this, the Nabisco Teddy Grahams in the Chocolatey Chip flavor are actually vegan too.

These flavored graham crackers include:

Luckily, the Teddy Grahams in the cinnamon and chocolate flavor are both additionally suitable for vegans!

Nairn’s are a Scottish oat based product producer that actually makes four different versions of oat grahams, three of which are suitable for vegans. Their gluten free oat graham crackers come in the original flavor, stem ginger and the raisin flavor, all of which are 100% vegan friendly!

For the Original Gluten Free Oat Grahams, ingredients include:

Similarly, Kinnikinnick is another gluten free based brand that makes food items suitable for vegans and vegetarians. Their graham style crackers, the S’moreables Cookies are 100% vegan friendly, and gluten free, with no dairy products included.

Not only are Nabisco and Nairn’s graham crackers vegan, the Keebler Graham Crackers in the Original style are also vegan friendly! The original graham crackers contain no dairy products, and no animal products so you can enjoy these ones freely.

The Keebler Original Graham Crackers are made with:

There are a few graham cracker brands that you will want to avoid as they are not strictly vegan, or there is the risk of cross contamination and animal products during the production of the graham crackers.

Luckily, there is quite a variety of different graham crackers available on the market that are suitable for a vegan lifestyle. You can happily enjoy these sweet treats, as long as you stick to Keebler Original, Nabisco Graham Crackers, Teddy Chocolatey Chip crackers, and the Gluten Free S’moreables graham style crackers!

Which Crackers are Vegan?

Before we get into the nitty-gritty of which Graham crackers are vegan, let’s start with some good news: there’s a huge selection of vegan-friendly crackers out there!

Vegans everywhere will be pleased to know that most Graham crackers also feature on the vegan crackers list.

It’s easy to find (and even make) vegan-friendly Graham crackers because, in essence, these tasty snacks are just sweetened whole-wheat bakes. All that’s really needed in a delicious Graham cracker is whole-wheat flour, sugar, and a fat source.

Teddy Graham crackers have caused some confusion around their vegan-friendly status because of their wide flavor range.

Luckily, most Teddy Grahams are suitable for vegans. The cinnamon, chocolate chip, and even chocolate Teddy Graham flavors are deliciously vegan. This is because the chocolate used to flavor the crackers is high-percentage and doesn’t contain milk.

The honey and birthday cake flavors, unfortunately, are not vegan. The honey flavor, of course, contains honey, while the birthday cake recipe uses eggs.

What are the Ingredients in Honey Maid Graham Crackers?

While the name ‘Honey Maid’ does give consumers a hint at the ingredients, we can confirm that Honey Maid vegan crackers do contain real honey, making them unsuitable for most vegans.

There is some debate amongst the vegan community as to the cruelty of honey production and consumption. Some vegans choose to continue consuming honey because they don’t consider honey harvesting comparable to the cruelty of dairy farming, for example.

However, most vegans’ consensus is that honey is not vegan-friendly due to the practices used by large-scale bee farms, such as wing clipping and, rarely, artificial insemination and cyanide gassing. Therefore, Honey Maid Graham crackers will be unsuitable for most vegans.