Andes Mints are small candies that are rectangular in shape. They are thin layers of mint paste covered in a layer of chocolate wrapped in green foils with the Andes logo stamped into them. 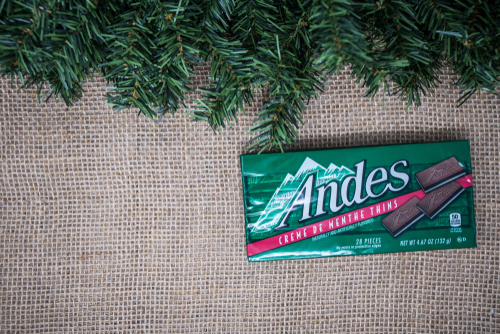 Andes Mints were first introduced in 1950 and are now produced by Tootsie Roll Industries. Today we are going to be delving into Andes Mints and answering the much-anticipated question - are Andes Mints vegan?

Unfortunately, Andes Mints are not vegan as they contain more than one milk-based component within the ingredient list - Nonfat Milk, Lactose, and Milk Protein Concentrate.

Andes Mints also come in different variations, such as:

As well as having multiple different milk-based products within the formula, Andes Mints also contain a number of controversial ingredients that you might want to consider before consuming. We have listed these below for your convenience.

Sugar is the most common ingredient found within all candies, so it’s no surprise that Andes Mints contain sugar. However, this could be controversial to the vegan diet. Cane sugar is often processed with bone char to bleach it to its white color.

While all the bone char is removed before being used in candies, people who follow a vegan diet often do not choose to consume cane sugar because of how it is processed.

As the ingredients list for Andes Mints does not say which type of sugar is used, it’s up to you to decide whether you want to consume the candy without knowing whether the sugar has been refined with bone char or not.

Palm oil is a controversial ingredient that is unfortunately used in many different foods and household items. It is used to preserve the life of these items to increase the shelf life, but palm oil farming is a major cause of deforestation.

Orangutans, among other species, are becoming extinct due to the extraction of palm oil removing their habitats. Palm oil is certainly a controversial ingredient for vegans as well as anyone else that is passionate about animals.

Natural flavors can come from both plant and animal sources, and artificial flavorings have been known to be tested on animals in the past. Without having more access to which type of flavorings Andes Mints has used, it is impossible to know whether they are vegan-friendly or not.

Much like flavorings, food colorings have been known to be tested on animals in the past. Again, as Andes Mints does not disclose what colors they have used within the formula, we cannot definitively say whether this follows the vegan diet or not.

As we have mentioned earlier, Andes Mints contain multiple milk-based products and therefore are not dairy-free.

Yes, all types of Andes Mints are gluten-free.

Yes, all types of Andes Mints are nut-free according to Tootsie Roll Industries. They are also free of nut traces and are not made anywhere that cross-contamination could become an issue.

Yes, Andes Mints are vegetarian-friendly because the only animal-based products within the ingredients list are milk-based.

Yes, Andes Mints are kosher-dairy. This has been assured by Tootsie Roll Industries on their website.

To sum up, Andes Mints and its variants are not considered vegan-friendly due to the milk-based products within the formula. There are three components in the ingredients list that definitively state that Andes Mints are not vegan.

Andes Mints also contain a number of controversial ingredients such as palm oil, flavorings, colors, and sugar. You should consider why these are controversial and make up your own mind before consuming anything with them in the ingredients list.