Hi, my name is Luis Souza, I would like to share with you my story in my plight towards health and vitality that led to the foundation of RawVeganPower.com 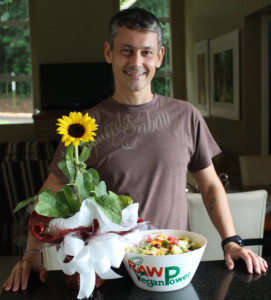 With all the stress and challenges of life, I was just like everyone else who eats anything under the sun. In fact, as a child every time we were at the table for breakfast, lunch or dinner, we used to hear that we should “eat everything”.

Even though I already hated milk and some types of meat, in those days this seemed to be a good parent teaching, but nowadays “eating everything” is commonly known as a huge mistake…

Within those years I started suffering from sinusitis, which is an awful and embarrassing health issue. Imagine having runny nose, headaches and fatigue caused by sinusitis all year round?

Well, I tried all the medications available, but to no avail, my sinusitis remained. After prescribing me lots of expensive medicines, two very well paid doctors wanted to surgically open my nose and sinus with no 100% guarantee that they would solve my problem.

“At the last minute”, I was saved by my first vegan habit: stopping any milk and dairy consumption and drinking plenty of water, I got better in a matter of 2 or 3 weeks. I guess it’s not necessary to explain why I became very suspicious of doctors since that experience… None of the two doctors had prescribed me “simple, easy and cheap water” as a medicine!!!

A little later, as good health is a very important aspect of my life, I became a vegetarian and I can say that it is much healthier and better compared to my previous lifestyle.

But a greater breakthrough happened only when, surfing for ideas for a beauty blog that I have, I stumble upon some videos about raw food and its amazing benefits to our bodies.

These people became my inspiration for keeping and improving my health.

Truly it is a blessing; just imagine having a second and third gear when it comes to your energy, when previously you were only in the first or rear gear and sometimes someone had to push you.

But lately I passed by the 80-10-10 Diet by Dr. Douglas Graham. This book opened up many realizations in my life since it made me aware of the right proportions of carbohydrates, proteins and fat that we were designed to eat.

And this discovery led me to another huge breakthrough…

In simple words, during my whole life I did not know that I’ve suffered from depression, until I realized that I didn’t feel it anymore. Before the 80-10-10 diet I thought it was “normal” to regularly have many bad shame, low self-esteem and even suicidal thoughts passing through my mind.

With the 80% of carbohydrates in the form of fruits being consumed by me on a daily basis, I just started to feel much better than in my entire previous life, which means almost 50 years in these days…

Just imagine how many people have taken their lives because they did not know that they were depressed!

And how many keep ingesting many expensive drugs prescribed by even more expensive doctors, without knowing that their diets are the real cause of their overall depressing state!

Gladly, before I became part of the suicide statistics around the world, I got cured just by having the 80-10-10 raw food diet, a high carb low fat raw vegan diet.

Being grateful with my gift of health and happiness, all I want now is to motivate and inspire you and everybody else to enjoy the same benefits that I’m enjoying.

For those who are suffering from illnesses and diseases, it is easier to change the lifestyle because; of course the fear of death is right on their faces.

For those suffering from fatal diseases, it’s a struggle to survive everyday and to still wake up alive in the morning.

But for those who never experienced any health issues, it’s difficult to change the poor lifestyle.

Sadly, all the bad foods that enter our body may accumulate and develop as a disease in the future.

Just look at the world statistics about health. How many wasted lives are there due to heart disease, high blood and all other diseases caused by poor lifestyle?

Health is the ultimate gift that you can give yourself.

So please don’t wait for the worst. Take action, now!

Well, action is only possible with power and that’s what you get in a raw vegan diet, which leads us to the name of the blog: Raw Vegan POWER.

OuThe power to have a sexier body and a sharper mind, with a sustainable diet that doesn’t hurt the planet and other species, is something that is really precious.

So here we are, sharing all the best articles, videos, news and products that can help you enjoy the RAW VEGAN POWER.

When I was starting my raw food diet, I searched for the stories of people who are successful and they became my inspiration. I read their blogs everyday to keep my high spirits about my health.

And you can do the same thing here too!

Our mission here it to fuel you up and motivate you day by day to be full of Raw Vegan Power!

Thank you for stopping by!